The Zapata peninsula and the Bay of Pigs are not usually frequented places in Cuba. This area, however, contains an important history of relations between the United States and Cuba and is extremely interesting in terms of nature. It is definitely worth going here! 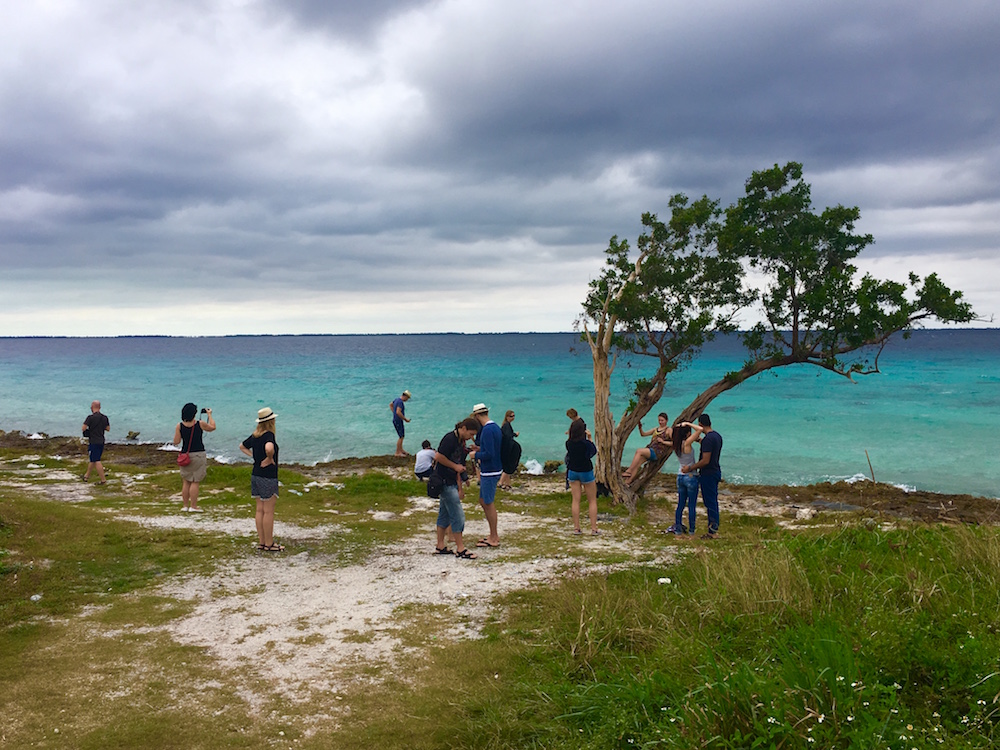 The Zapata peninsula owes its name to the shape … of a Zapato (Shoe). Like Italy, the region is shaped like a shoe on the map. It is also often called the Ciénaga de Zapata (Zapata Swamp) for its geographic conditions. During the rainy season, the peninsula regularly floods and is under water. The Bay of Pigs gets its name from the pigs that once walked the beaches. Nowadays it is difficult to say how many anecdotal pigs are and how real are they.

The National Park exclusively, was recognized in 2001 by UNESCO as a Biosphere Reserve. Cubans also appreciated this region underdeveloped as it was not until the decade of 1970 that investments, sugar cane plantations as well as citrus gardens began to appear. Fidel Castro himself became interested in Zapata after getting the power. During the literacy campaign in Cuba that took place in the 1960s, schools and health centers were established on the peninsula, and resorts a little later. 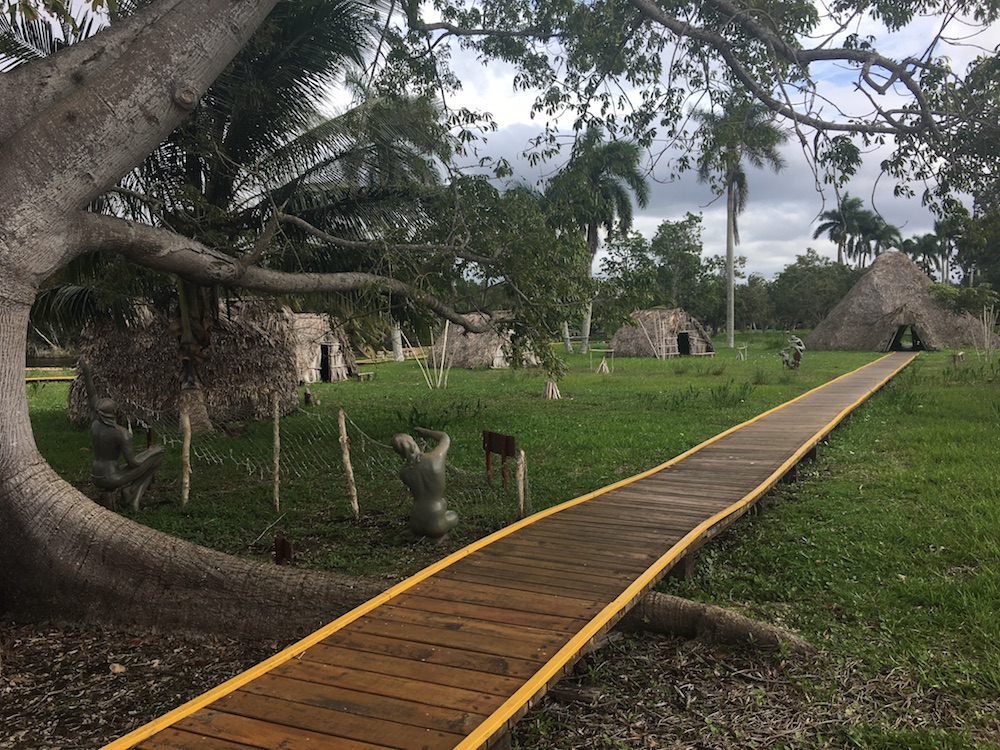 Everyone knows, however, the Bay of Pigs because of the victory of the Cubans over the US. On October 18, 1960, an economic embargo was implemented. The relations between the United States and Cuba began to deteriorate rapidly. Eventually, President John Kennedy issued, not with the best wishes, his consent to invade Cuba, but with the condition of moving the attack from Trinidad, that was the initial plan, to uninhabited beaches. It happens in Playa Girón and Playa Larga.

On April 15, 1961, the Americans bombed three Cuban air bases. In response for this, Castro announced to the world the socialist character of the Cuban Revolution. The answer did not have to wait long. On April 17, 1961, 1,400 Cuban emigrants (!), trained by the CIA, tried to attack their homeland. Fidel led the battles from the Sugar Central named “Australia”. It was his great victory. Cuban emigrants did not know the area, and Fidel left them in the swamp. The victory at the Bay of Pigs has strengthened Fidel’s power not only in Cuba, but throughout the world. A great knowledge of geography by Castro was also very useful here, for which he owed many of his strategic measures in the struggles for his government in Cuba.

However, outside of the historical context, the Zapata Peninsula has much to offer to nature lovers. This is one of the best places for bird watching in Cuba. Crocodiles swim here in the mangrove waters and for this we have here two beautiful beaches. 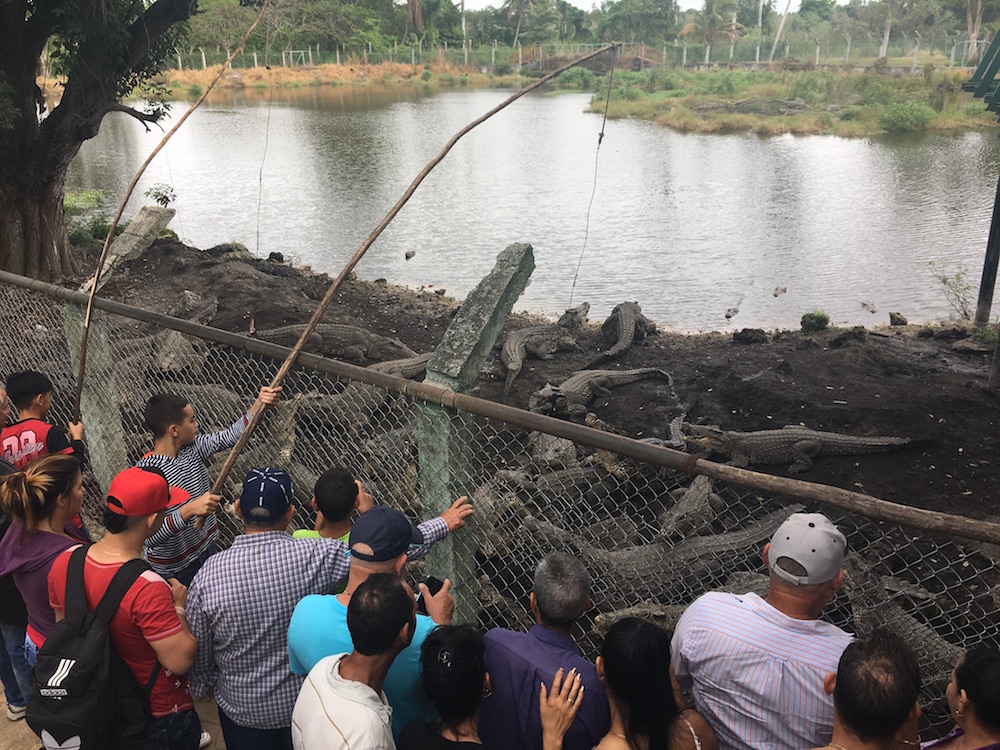 Coconut Palm, clear sand and crystal clear water. All of the abovementioned makes Playa Larga struggle for the recognition by tourists for being the most beautiful beach in southern Cuba. Both, the beach and the town are very quiet and away from the tourist destination. Whoever wish to know the corners of Cuba, will surely feel good here. On the outskirts of the city you will find the only hotel, the Hotel Playa Larga, with its own beach and swimming pool.

This beautiful Cave of Fishes is a well or sinkhole (in Spanish cenote), in which the deepest places reach de profundity of 70 meters. The cave is connected to the ocean by an underground tunnel, to which it owes its salt water. Right next to it, we find a restaurant that serves meats. .. Like Crocodile meat.

The crocodile farm was established to protect the Cuban crocodile that is a species in danger of extinction. In the farm we can find the Cuban (smaller) and much more the American crocodiles. It is possible to feed the crocodile with meat in a makeshift bar. We must be very careful here because the fence of the place where the largest crocodiles are is in critical conditions. The ticket costs 5 CUC. 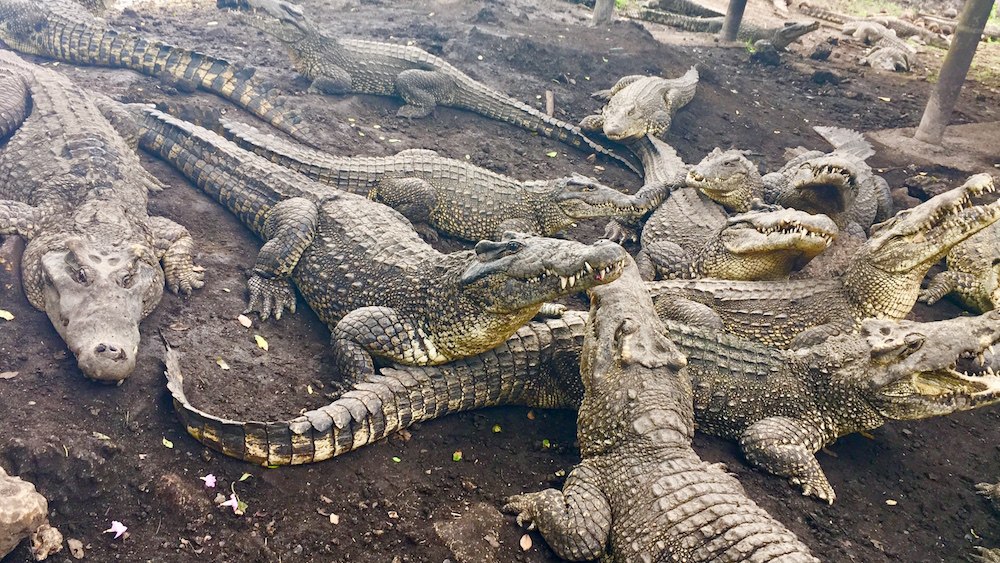 Next to the crocodiles it is located the treasures lake or “treasure lagoon”. From La Boca station we can depart in a motor boat along a fresh water reservoir for the reconstruction of an Indian town. These waters are the kingdom of trout, carp, perch and manjuarí that is a fish with a crocodile head (they can be admired in fountain at the crocodile farm). Navigating further we can move to the hotel complex on the water, or Villa Guama. The town itself refers to the time of the Tainos that were the Indians who lived in Cuba and fought against the Spanish conquerors. According to legend, the Indians who escaped from the Spaniards threw sacks of gold into the water, hence the name “treasure lagoon”. The price for the tickets of the two-way boat: 12 CUC. 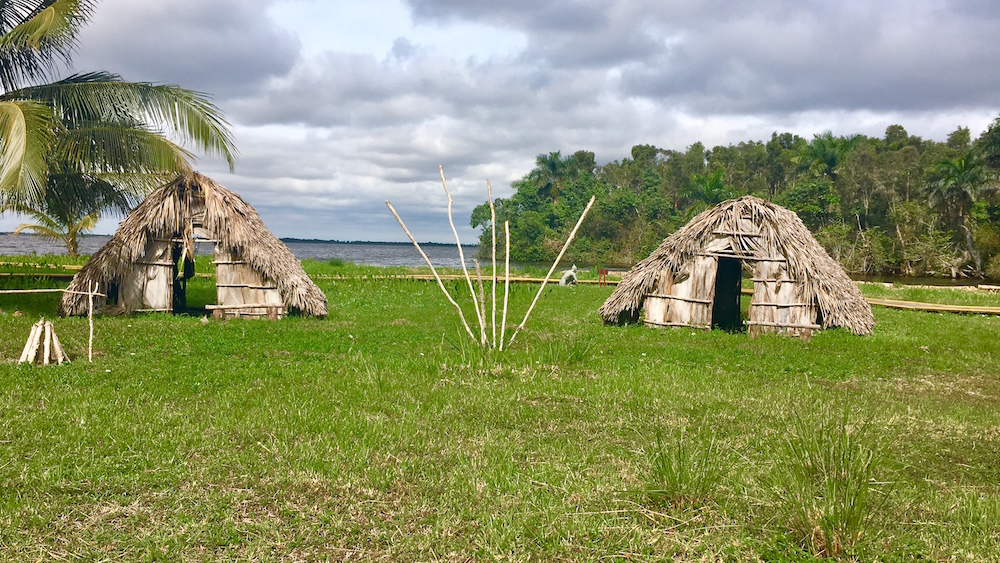 Playa Girón is a quiet and charming fishing village. While ordering dinner in one of the guesthouses we are having the opportunity of a real sea feast. Every morning the fishermen go out to fish their favorite species of fish. Besides the city, there is a museum here (point 10) and the beautiful beach of Playa Los Cocos that will satisfy the wishes of those who love to have a sunbathe.

Caleta Buena is a private area for sunbathing (15 CUC per person that includes lunch, hammocks and drinks at the bar). We have here places for divers and snorkeling or simply swimming in the pool, which is like a fabulous aquarium.

This is one of the most important places for divers at the Bay of Pigs. In Punta Perdiz there is a diving center and lovers of the underwater world can admire the walls of the coral reefs and the beautiful reef fishes.

Santo Tomas will be for ornithologists not only a habitat of numerous endemic species but also an opportunity to observe the Northern Flicker, the Zapata Wren, the Cuban Parakeet and the Zapata Sparrow, as well as the Cuban Emerald that is a hummingbird that is found throughout the island.

In the salt lagoon, if we are lucky, we will be able to observe the pink flamingos that are simply a fabulous landscape in this swampy valley, the Zapata Peninsula. We can organize a trip together with a guide and transport, to the town of Playa Larga.

The famous invasion’s museum is located in Playa Girón, on the road that leads to the hotel, right next to the Viazul station. The expositions of the invasion are also on display in the outside, but the museum itself is worth to visit even for people who don’t like these ways of spending time.