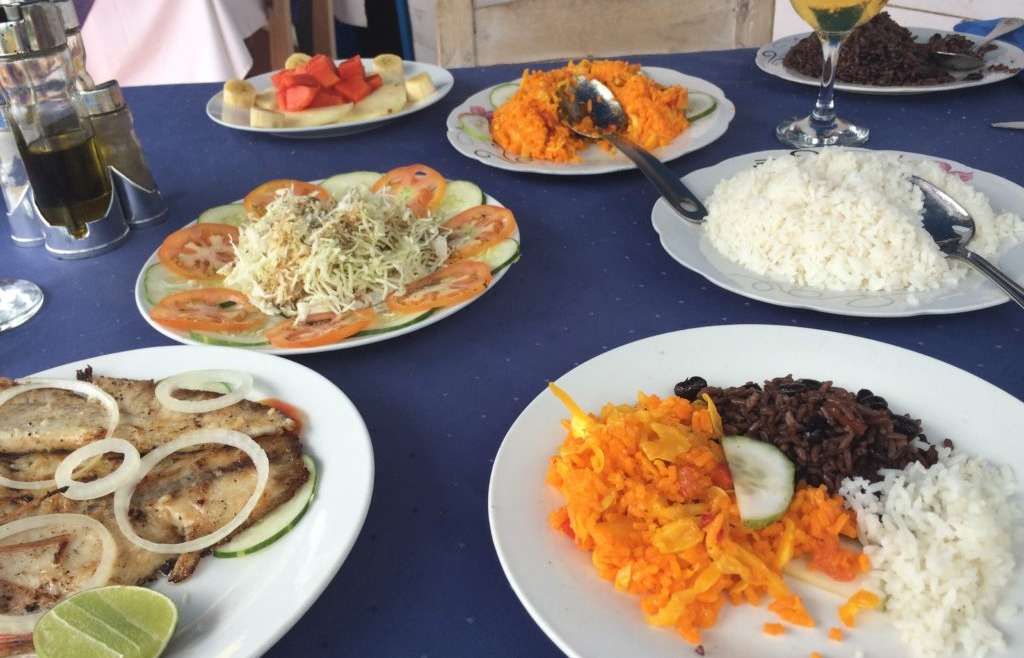 Although there are only a very few amounts of ingredients available in Cuba, Cuban cuisine is extremely aromatic and flavorful and without artificial additives. However, you need to know what to taste and where to do it!

Nowadays, when I know how my mother-in-law cooks and how Michel cooks (my husband, a Cuban); I understand that the Cubans can evoke something from nothing, and where it is cooked with the heart, there is a cuisine extremely aromatic and tasteful.

In every respectful kitchen, there is a mortar that is used to crush the fresh ingredients that replace the spices we know from the stores. However, you cannot imagine how pleased my mother-in-law is with the garlic press we brought from Poland. It is such a small improvement for the Cuban tradition! In a Cuban house, the flavour is very important and Cubans know how to deal with the deficiencies of their closed Island.

Spices in the Cuban cuisine

Cuban cuisine is very different to the one we know in Poland. This is another form of serving, of seasoning and consuming food. It is worthwhile to open up to this alternative and not to hope to eat pork chops and meatballs in Cuba.

The basic ingredients when we talk about spices in Cuba are cumin, oregano, bay leaves (if they are available), onions and garlic. The orange juice (sour) and the lemon juice are also used very often, for the meat, but also as sauce, to put it on potatoes, manioc (yucca), etc.

The flavour is given by the sautéed, a roux type that consists of garlic, onion, pepper and olive oil, of course. The sautéed is added to the beans, rice and beans, meats and tomato sauce.

Mojo marinade is also popular: lime juice, garlic, and olive oil, as well as onion slices. It is added to meats and vegetables. 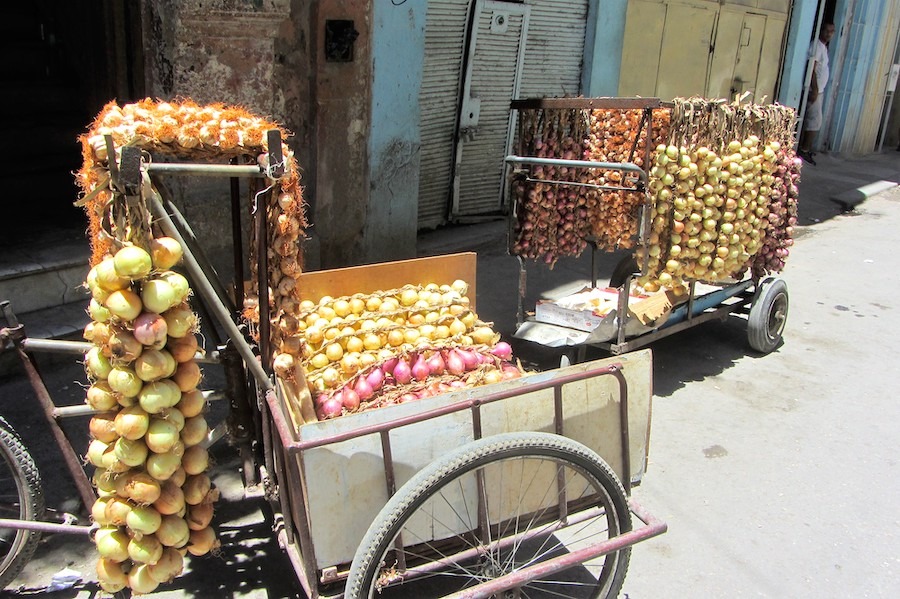 When one of the Greeks who stayed with us in Vinales wrote in the reviews “it was the best food of my life and I am a demanding Greek, so I know what I say”. I knew well what he meant. In Cuba, there are no chemicals or artificial additives for the food, fruits are not sprayed and pesticides are not used on crops. The food really tastes different there. The side effect is that after a long stay in Cuba and returning to Europe, you have the impression that you are constantly eating chemicals.

It is true that in Cuba there are not most of the ingredients we know in Europe. However, Cubans have mastered conjuring up delicious foods from what is available. They prepare rice themselves in several ways. It is the same with eggs or fruits. On this basis, dry dishes and sweet desserts are created.

What does Cubans eat?

The private houses almost always have the same for breakfast. Tortillas (Spanish omelette), bread, available extras (cheese, ham, guava jam), fresh fruit, fresh fruit juice and coffee with milk (tea in Cuba is almost not consumed). However, this is not a “Cuban breakfast”, just a breakfast in Cuba for tourists. Cubans, if they eat breakfast, they do it more modestly: bread with an omelette. Let’s be clear: there is only one type of bread: of course!

Dinner in Cuba is rice with black beans and toppings. Dinner generally looks pretty the same. Meat, fish and seafood are served in the tourist kitchen. The most popular dessert is flan (description below). Cubans also love ice cream, which is why they go to the state ice cream parlours: Coppelia (ice cream is subsidized by the state).

Cubans love meat. To be honest, I have the impression that vegetarianism is a form of masochism for them. But I want to calm down all vegetarians and even vegans; you can easily do it well in Cuba. You will appreciate the taste of rice with beans, an unforgettable smell of cucumbers and tomatoes, not to mention the fruits. In addition, the taste of the Cuban mango and pineapple is not easy to forget for many years… Either is the vegetarian food in the countryside. The most popular Cuban dishes:

– The palamillo is also beef, but this time in the form of a fillet with sour orange juice.

– Lobster / Lobster – Cuban pride on a plate. It can be roasted with garlic or stewed in tomato sauce.

– Fish (Spanish: Pescado); one of the most delicious is the red snapper fish (Pargo), served grilled or fried;

– Chicken (Spanish pollo); in Cuba, chicken breast fillet is rarely eaten; roasted chicken legs are served in restaurants and cooked at home due to the lack of ovens).

– Pork (Spanish: cerdo) is the favourite meat for Cubans and is served in many forms. Pork is eaten in the form of a fillet or “pork steak”, as well as roast pork or roast suckling pork. That way, the roasted pork is roasted pork marinated with garlic and sour orange juice.

– Fried plantains: a type of male plantains (Spanish: platano macho), which is a less sweet variety of plantains, ideal for frying; served as an aperitif or as a complement of the main course.

– Garlic Tostones, or fried banana pancakes with minced garlic (dry flavour, served as a garnish or as a complement to the main dish).

– Tostones al … tostones can be filled with meat, fish (usual tuna) or served alone, without additions.

– Banana chips (chicharitas): the same type of bananas but green (green plantain) that is served as a snack or as a main dish.

– Banana cake: a banana mixed up with slices of fried meat and melted white cheese.

– Rice and beans (Spanish: Arroz con frijoles); beans are served separately in a way known to us as soup and rice; Cubans put rice on the beans, they mix it up and they eat). The “soup” itself is stew.

(Rice Moors y Christians or congriss), rice cooked along with the beans (aromatically seasoned), which gives the dish a characteristic colour. Moros y Christianos, or Moors and Christians, is rice with black beans. The name dates back to the middle age, from the domination war of Spain between Christians and Moors from North Africa. The congriss rice is prepared with red beans.

– Tamal– A traditional Mexican dish, but also served in Cuba. Tamale is a cake made from fresh grounded corn, which is cooked on a corn cob leaf, which resembles polish cabbage rolls.

– Croquettes, known in Europe as Spanish croquettes. The most common are tuna (fish), chicken and vegetarian.

– Caldosa – vegetable soup with chicken. It should be noted, however, that Cubans eat very little soup. In addition, there is a popular saying: “the fearless men do not eat soup”, as well as the belief that soup is for children, the sick and the elderly.

Fish and Seafood in Cuba

In addition to all the above-mentioned, that can be found throughout Cuba and it is very popular; we have a great selection of fish and seafood on the Island. Unfortunately, Cubans do not have such easy access to them, the prices are high, and they generally shop in the black market. The reason is the export of fish and shellfish outside of Cuba.

Besides crabs, red snapper fish and shrimp, it is worth trying:

• Several types of shells, or rather the meat of them (popular at the Bay of Pigs),

• Squid, the most delicious are the white ones,

• Tetis (fish available among others in Baracoa). – Coconut sweet: a dessert made of fresh coconut (grated coconut) and sugar, sometimes also made with pineapple.

– Sweet of … the same sweetness and the way that Cubans make the coconut sweet, they also prepare sweets from guava, papaya, etc. candied, with a lot of sugar.

– Flan (traditional Spanish dessert, a delicacy in Cuba – delicious, fluffy, cold and very sweet; made from eggs, milk and sugar).

– Churros – Oblong Cuban doughnuts, fried in the same way; in Cuba, it is served with sugar and cinnamon, sometimes chocolate or honey.

– Patty – baked dumplings. It is a popular sweet with coconut filling (coconut patty).

– Cucurucho: a dessert wrapped in a palm leaf, in which you will find very sweet coconut pulp inside.

– Cappuccinos: yellow cookies that are sold in bakeries and patisseries.

Snacks and street food in Cuba:

• Popcorn, or simply palomitas, which is loved by Cubans!

• Pizza – sold in the so-called Street Windows. It’s greasy and has nothing to do with Italian pizza.

• Chiviricos: crispy fried corn pancakes. It is served sweet or salty. It is sold in Havana very often on the street.

• Bread, Cubans are happy to get stuck on muffins with cheese (bread with cheese), ham (bread with ham), or minced pork (bread with pork or bread with lechon). A traditional Cuban sandwich, today it is more a tourist and export dish than a Cuban one, served with pork, cheese and pickles.

Fruits and vegetables are expensive in Cuba, for both tourists and Cubans. Compared to polish prices, buying mango, pineapple and bananas are cheap. Cuban fruits are delicious, sweet and contain no chemicals. They are not imported. Cubans eat fruits and vegetables according to their season; we will not buy everything all year long. For example, the avocado season is during summer and ends around November. Similarly with fresh mango: in winter only a mango juice can be enjoyed by our taste, but not fresh fruit. 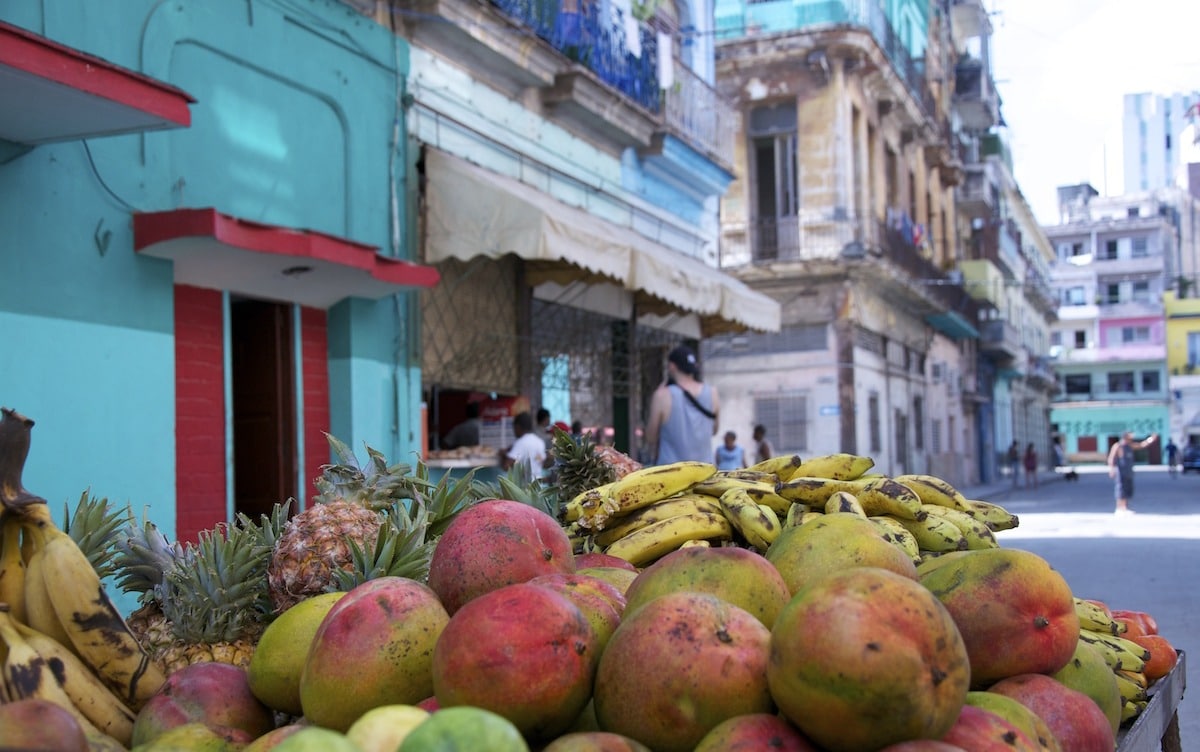 Papaya is a called “bomb fruit” in Cuba: served fresh, usually for breakfast or candied as dessert.

Vegetables are expensive for Cubans and they don’t have a tradition of eating salads. The choice of vegetables is also modest. Besides exotic potato varieties, we will not find vegetables that are not also available in Poland. It should be noted, apart from the potatoes of different varieties: sweet butternut squash, horseradish and delicious avocado.

Drinks and cocktails of Cuba

Somehow it happened I have a large collection of drinks. Okay, most of the time it’s mojito and piña colada, but also multi-ingredient fresh fruit smoothies. This is nowhere in Cuba. Because of this, it is necessarily the loud music (very loud) and so another day passes on the island of the Castro brothers.

Cubans prefer rum or beer on hot days. However, the latter is expensive for the reality of Cuban income, making it a drink rather than for the holidays. Rum, on the other hand, is drunk in Cuba like whiskey, not in the form of drinks. In addition, the so-called mockery is not necessary for Cubans to be happy. What drinks are worth trying?