Trinidad is, right after Havana, an obliged visit in Cuba. The time stopped here long ago, but this is what makes the delightful of the city with its charm. Trinidad, or the Holy Trinity, was founded in 1514 by Diego Velázquez. It was the third city of Cuba. The first ones were Baracoa, where Christopher Columbus navigated and then, Bayamo. In 1988, Trinidad of Cuba was included in the list of the World Heritage sites by UNESCO. In 1950, the president at that time, Fulgencio Batista, accredited Trinidad as National Monument. The city was constructed on a hill of limestone around 120 meters above the sea level and about 13 kilometers from the coast. The area around Trinidad is surrounded by the river Gurabo.

Trinidad was in excellent conditions because there was no road to the city for a long time and ships only navigated until Casilda’s port. Until present day, not without reason it is said that Trinidad is a «city museum». We found here palaces and museums, but also guesthouses and private restaurants, as well as beautiful colonial furniture, porcelain, clocks and other exhibitions of the days of glory of Trinidad. The treasures remained along sugar barons who lived on sugar cane production.

Trinidad was considered a true pearl to the Spanish crown. The first conquers Spanish families extracted gold in this area, but deposits ran out rapidly. Then, it came the moment of white gold or sugar. So, Trinidad owes its development to this sweetness. 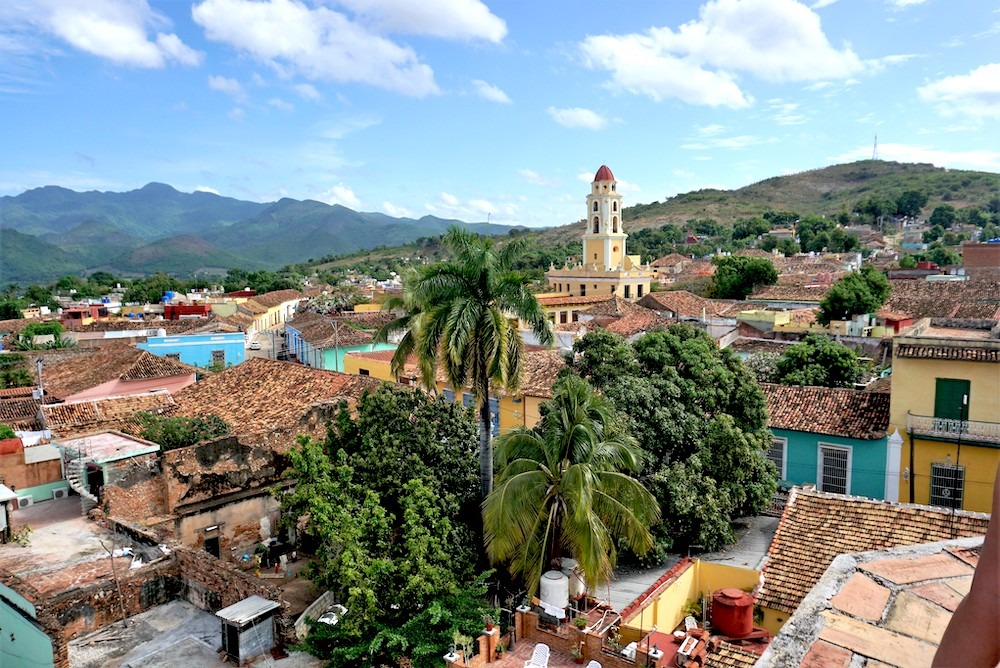 When in 1791, after the revolt of Haiti and its plantations of sugarcane were devastated, it was Trinidad and the plantations of the Sugar Mill Valley, the ones that dictated the prices of sugar. There were as many slaves in Cuba as local people; but it was not enough for a struggle like in Haiti. Nowadays is estimated that 60 percent of the inhabitants of Cuba are descendants of slaves.

After the fall in Haiti, the sugarcane plantations in Cuba began to grow dynamically and at the same time began a great slavery. Trinidad was a spot very important not only to receive slaves, but also for trading them. In area of Trinidad is located the farm Guachunango, one of the few sugar plantations that is still working.

Anyone who visits Cuba will notice easily a great quantity of street dogs. But dogs are not the ones that call the attention in Trinidad, but … bird’s cages are. An interesting tradition of Trinidad’s inhabitants, and more specifically its men, it is to take for a walk their singing «children». It is said that this tradition has lasted from the colonial time and brings happiness to the owners. The popular varieties are the Cuban Bullfinch, the Nightingale or the Northern Mockingbird that as the name indicates it can imitate the song of other birds. About 5 km towards south of Trinidad, it was built a port in the locality of Casilda, from where the sugar was sent to the world. There was also a line of railroad that has been working till this day. Trinidad was in boom. The residences began to be embellish, there were imported from Europe expensive furniture, chandeliers, porcelain, etc…  The modest homes of the once poor Trinidad were each time more decorated.

The houses of the decades of 1840 and 1850, inspired in the Spanish architecture, are distinguish for the gravity of their heavy doors and windows covered with wooden bars. The houses of the XIX century are characterizing for richness ostentatious: bars of forged iron meticulously decorated, adorned entries, etc.

A characteristic element of the houses of Trinidad is the presence iron bars in the windows. This was due to frequent attacks of pirates that pursued Trinidad time after time. Trinidad’s symbol is the characteristic tower (visible in the image above) of the former Franciscan monastery. Until today, adorn the entrance the coin of 0.25 CUC.

Trinidad’s streets are paved with stones, and residents call them bald stones. It is normal to see water flowing down the streets through the stones every night. Everything is due to the problems of plumbing that Trinidad confronts. The frustrated residents say they have a second Venice at home. The 10 main attractions of Trinidad

Trinidad is mainly a beautiful ancient historical downtown. The streets are paved with cobblestones and many museums and beautiful architecture of houses and restaurants are richly decorated. The main square, Plaza Mayor, it is a place for admiring artistic details: vases of ceramics and banks of forged iron. Certainly we should find charming older people along the Main Square, sited for hours to be photographed with tourists, for a small tariff, of course. It is worth to destine hours of the morning or the afternoon to visit the city, when there is still a lot of light for the pictures. Trinidad is outrageously photographic and the fact that is full of life 24/7 hours make it easier. 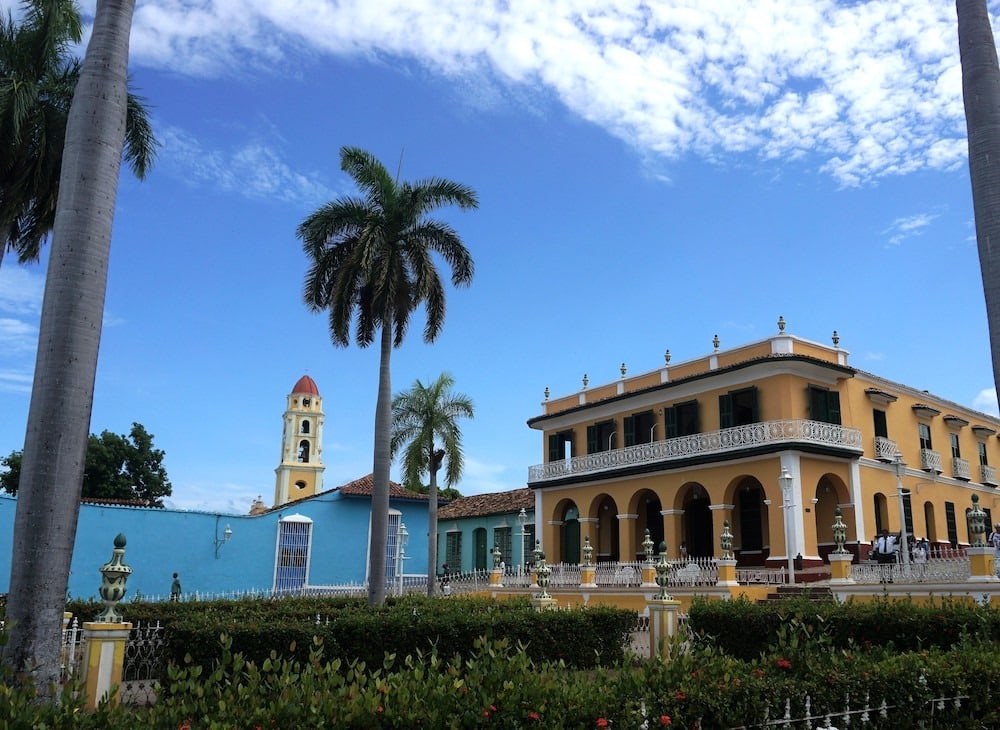 Two yellow towers rise above Trinidad. One of them with a dome (former Franciscan friar monastery and the symbol of Trinidad) and the other one it is rectangular, both are very close to Plaza Mayor. It is worthwhile to visit the last one (visitation also requires less gymnastics) in order to admire Trinidad from the high. We can see easily than all the houses are covered with red tiles that gives an unusual effect to images. Trinidad has a view from the high very beautiful and a clay color pretty consistent, as it always has been in the area, from which terracotta and tiles are made. 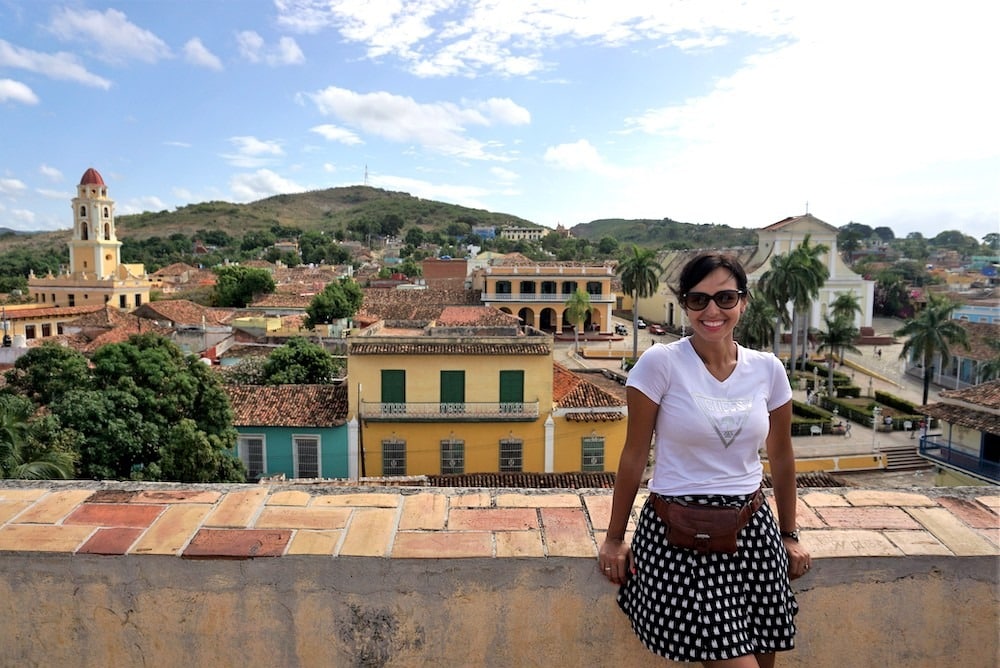 There was nobody in Trinidad who doesn’t spend a night by the famous stairs. It is here, without roof, where music is played every day and there is an opportunity to dance salsa with Cubans. The parties in the stairs begin every day at 21:30, but during high season it is worth to take a seat a short time before, to admire the artists of the House of Music. 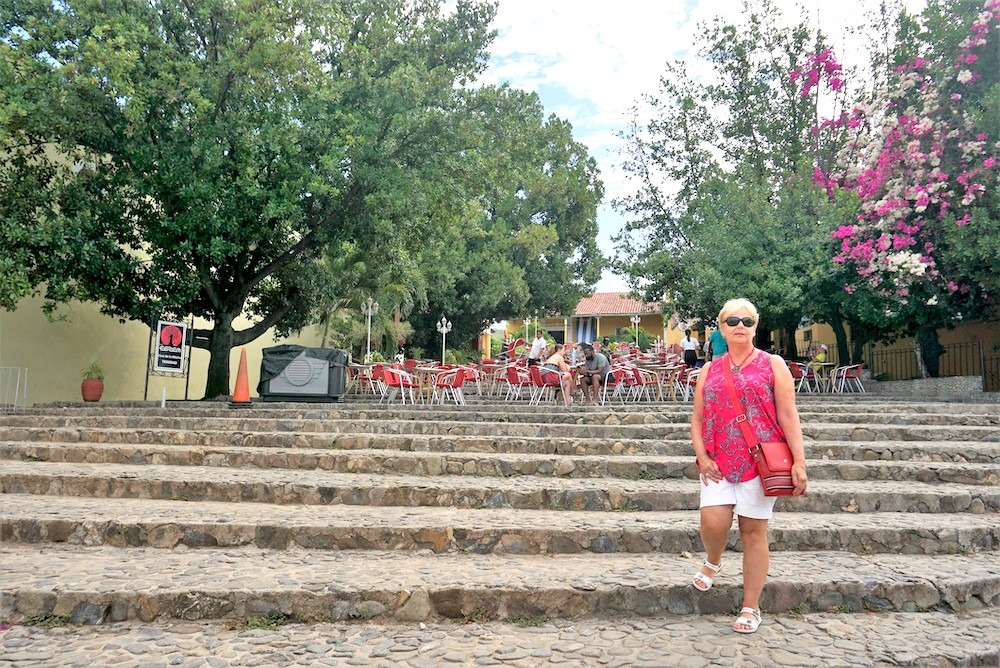 Going directly from the Main Square (Plaza Mayor) toward the stairs (we pass them and continue walking a few meters to the left), we arrive singing to the place: The Trova’s House. There you can dance fantastically and enjoy a live show every day while admiring the best artists of Cuba.

It is worthwhile to spend at least some nights in Trinidad to visit the artistic workshops, because Trinidad is, without any doubt, a city of artists. Cubans paint not only portraits and landscapes that are the most painted in the walls, but also they accomplish abstract works. If you dream about bringing a photo of Cuba, then in Trinidad the choice is one of the biggest of Cuba.

Trinidad is famous not only for the paintings, but also for the ceramics. The icon workshop is the one that belongs to Chichi. If we are lucky we will find the supervisor of the workshop, a friend of Castro’s family that will show us some tricks of ceramics. Prices are very attractive at the workshop, lower than city’s downtown. 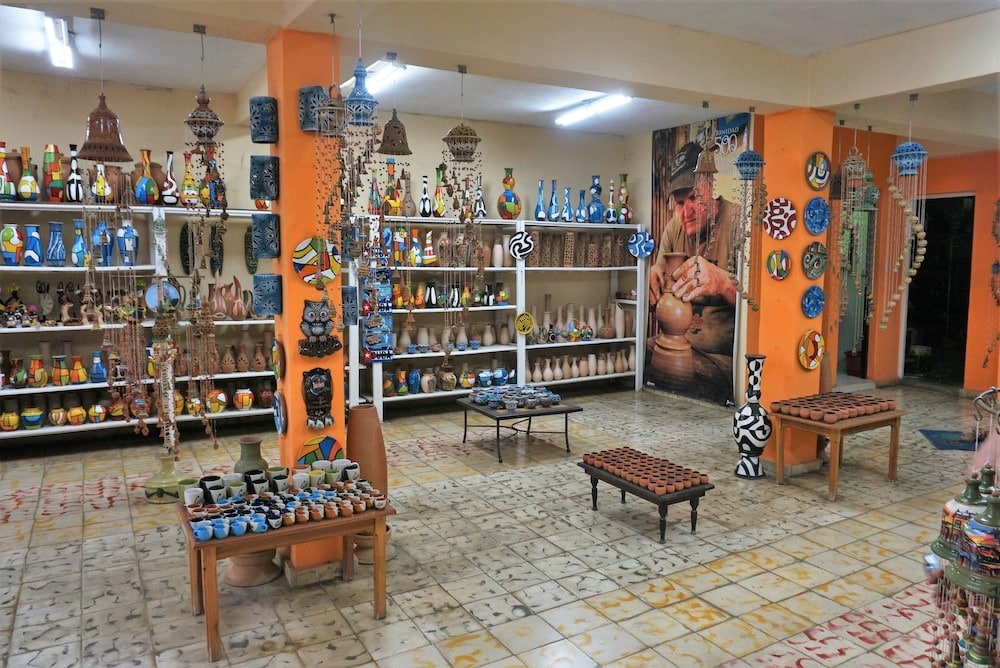 The Valley of Sugar Mill is the cradle of sugarcane plantations of Cuba. In the past, the Sugar Mill Valley consisted in 43 mills, the Iznaga’s brother’s tower, from where the slaves were watched out, as well as masters’ houses and barracks of slaves. Although today there is little left, if we are lucky, you can do tourism in an ancient museum train with a Bar coach. Theoretically, it departures at 9 in the morning every day from the station of Trinidad, but in practice often it breaks down.

The Iznaga tower of 44 meters of height, it is the place where the biggest farms during the XVIII and XIX centuries were located. Nowadays, the gentlemen’s house has become a restaurant and alongside there are slaves’ barracks (followers of Santeria). You can go up to the tower that has 137 degrees, in order to admire the beautiful landscapes. Tower’s bell sound leaded the slaves to work and noticed the danger during the fires. The legend says that Iznaga’s brothers fell in love to same woman and they competed each other. They bet for the one who see the water first, will win and will be loved. One of the brothers constructed wells, the other one built a tower and he was the first to see the Ocean. He imprisoned his ladylove, who was not the more loyal, in the tower where she died.

You will also find one of the more beautiful viewpoints in the Sugar Mill Valley: The Hill’s Lookout. The people who like spending time actively can take the rope way down (zip lining). Another point of the Valley is the ancient rum factory: Site of St. Isidro of Distillers. It was a farm since 1780 and remained inhabited until 2009, when unfortunately it was destroyed by a hurricane. The production of rum ceased in the decade of 1880. 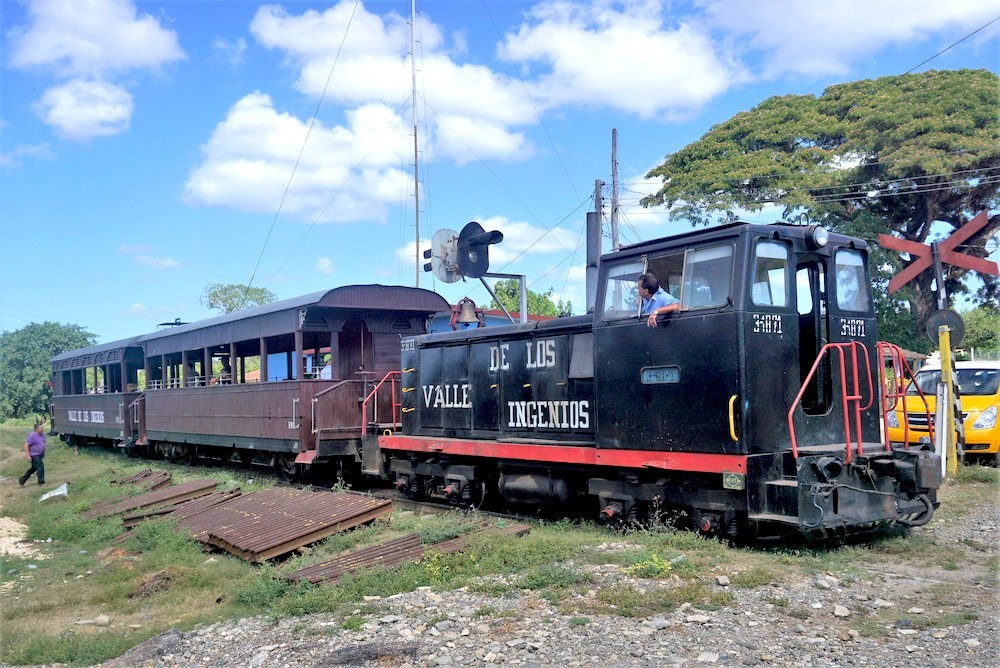 This is a little museum dedicated to Cuban religion Santeria. It is a combination of African beliefs and catholic symbols. The Santeria began with slaves that could not adore their deities in Cuba. This Afro-Cuban religion is becoming more and more popular in all Cuba, but Trinidad is considered its cradle. We can recognize Santeria’s followers because of their white dress and many necklaces of colors. 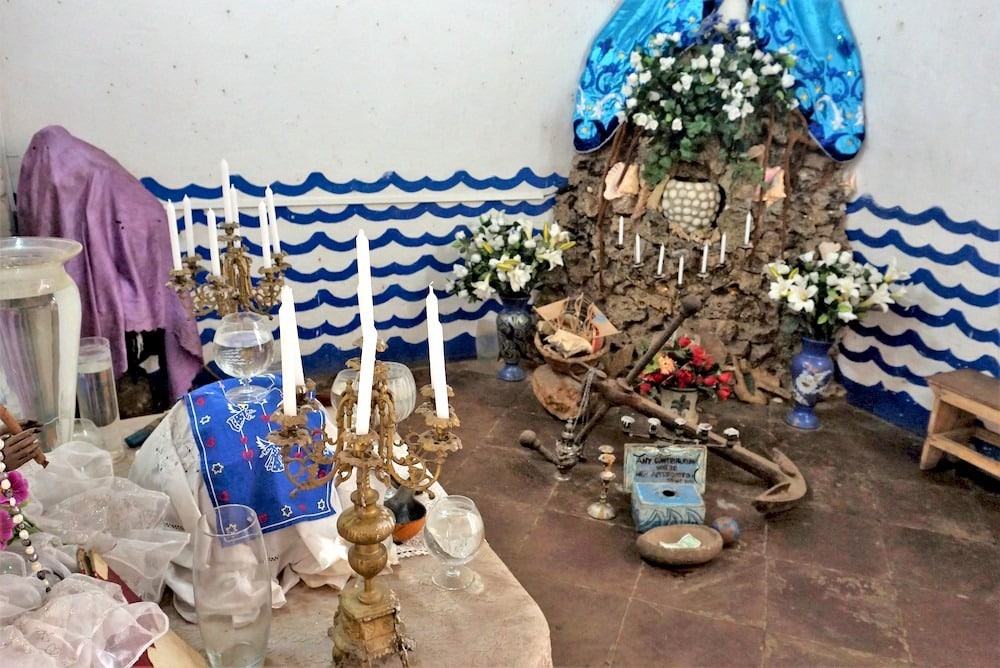 The most famous drink of Trinidad is Canchanchara, although this cocktail is original from the east of Cuba. This is a drink that uses lemon juice as raw material, as well as ice, honey and rum. It is a drink quite strong and it history goes back to the struggles of independence of Cuba: it was use to warm up the fighters and to disinfect their injuries. Today, in Trinidad’s center, you can buy it almost everywhere, it should be served in ceramics glasses with a straw, but Canchanchara is worthwhile to try it at the bar, where always live music is listened to.

Others of the famous bars we can find in Trinidad are … The Floridita and Bodeguita Del Medio. Does it sound familiar? Yes, they are copies of the emblematic bars of Havana that were created in Trinity in 2014, to commemorate the 500 anniversary of the foundation of the city.

At the end of the journey, there is nothing better than going to a Caribbean beach. We can go to Ancon Beach by taxi from for around 5 CUC. It is worth to try such journey, because Ancon Beach is considered the most beautiful beach of the south of Cuba. The Ancon’s peninsula has 5 km length and it is a place not so commercialized; in the present days, there are 3 hotels there, although there are more in construction. You must to hurry up to see a beach so beautiful, where never there is multitude of people and you can be there even without the company of strangers. 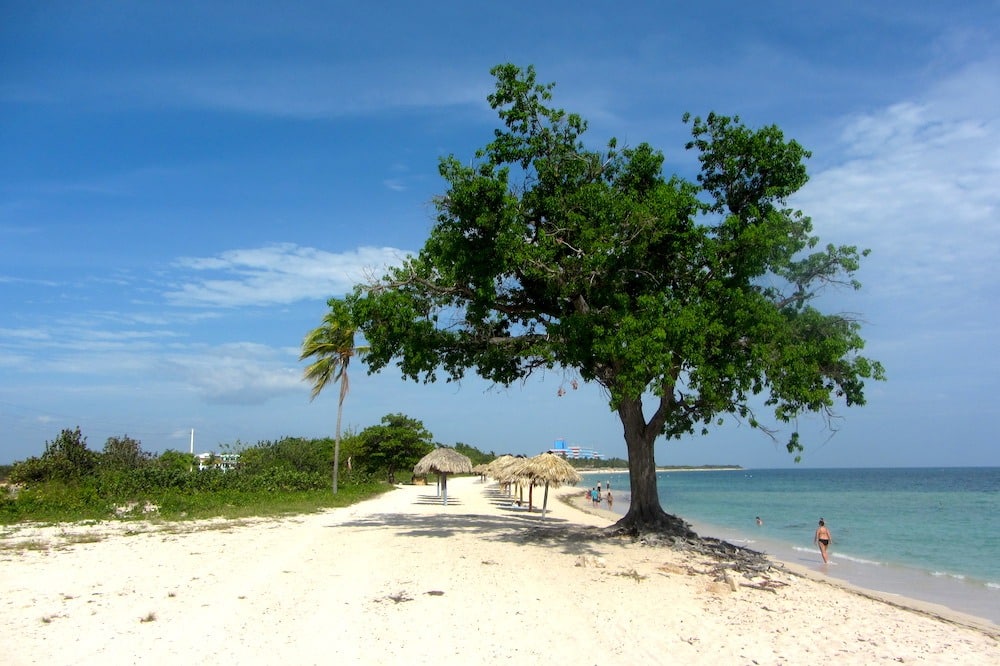