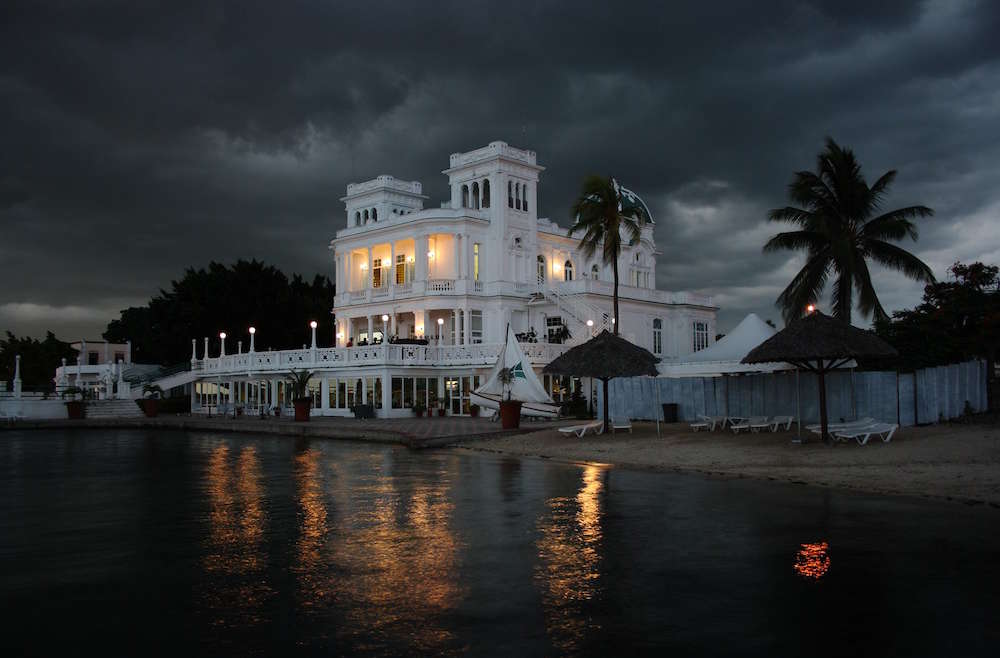 Cienfuegos is a good stopover on the way to Trinidad. We can stay here for a few hours, but if we decide to spend the night we won’t get bored either. The city is about a stone’s throw from the beautiful beach. The “Cuban Paris”, as it is said in Cienfuegos, was named for the first time Fernandina of Jagua to honour the King of Spain. Since 1819, however, it is called Cienfuegos and not as is erroneously believed, in honour of the Cuban revolutionary Camilo Cienfuegos, but to revere the Spanish governor at that time “Jose Cienfuegos”, who encouraged the French to settle in the area.

It is said that Cienfuegos is the “pearl of southern Cuba”. In 2005 the city was inscribed in the list of World Heritage Sites of UNESCO. The city’s buildings are inspired in Paris, which is why Cienfuegos earned the famous nickname of “Cuban Paris.”

In 1819, the French immigrant Don Luis D’Clouet invited 40 families from Philadelphia, New Orleans and Bordeaux in France, to the Caribbean to start developing the city. It is the only city in Cuba founded by the French. Unfortunately, in 1821, Cienfuegos was hit by a major hurricane that destroyed the existing works. However, the obstinate inhabitants did not give up and started all the work all over again.

Cienfuegos owes its heyday to the sugar cane, and more specifically to the sugar trade. After the Revolution (1959), mainly with the support of the USSR, Cienfuegos became an important port and with the 1976 reform, it became the administrative centre of the province of Cienfuegos. 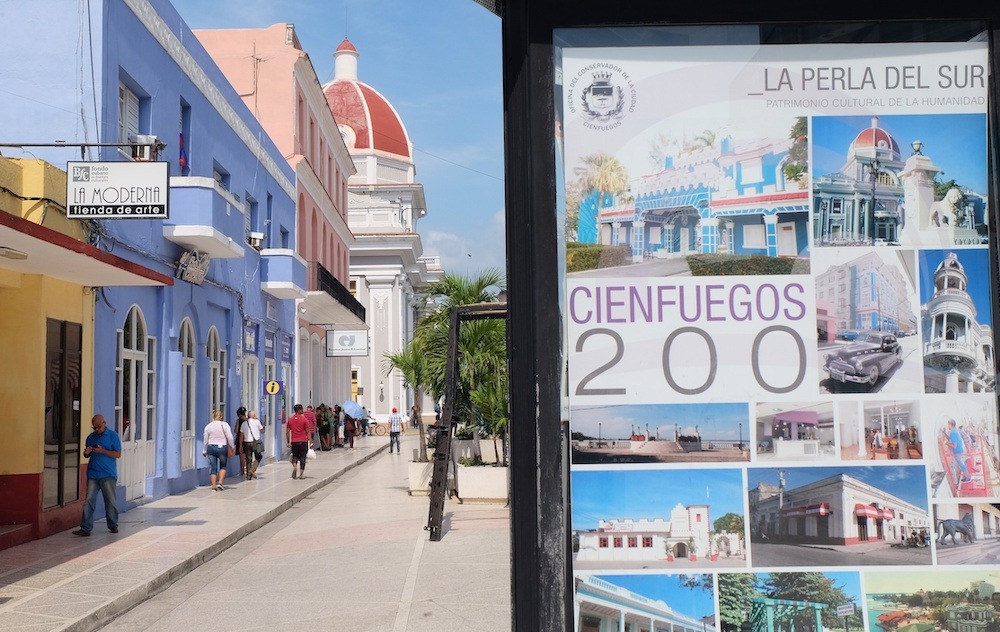 The figure that made Cienfuegos famous was named Benny More – a great-great-grandson of the king of Congo. The artist died in 1963 and 100,000 people attended his funeral. Till today, there is a sign in Cienfuegos that paraphrases the words of More when he said that Cienfuegos is the city he liked the most – “Cienfuegos is the city I like the most” -This is how Moré used to sing. 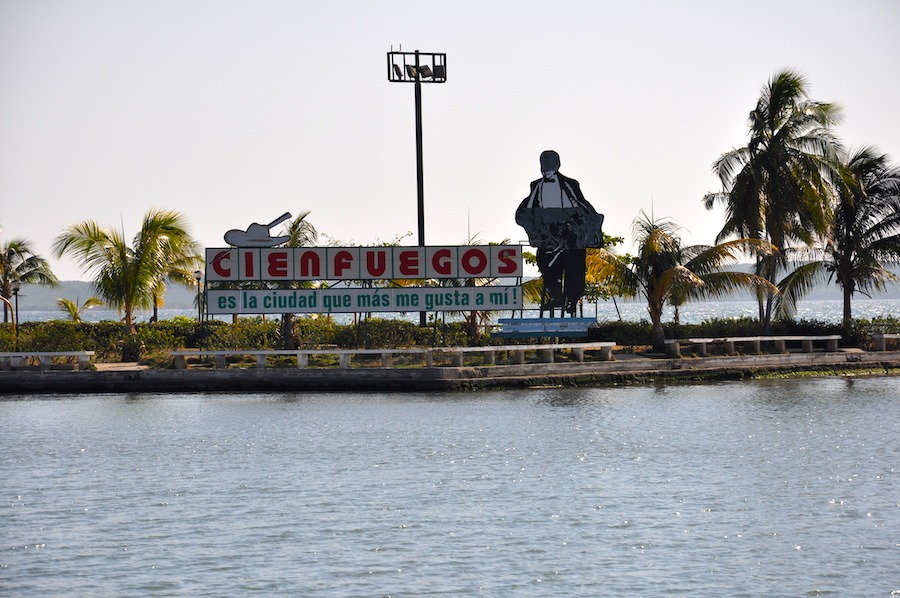 Near Cienfuegos we can find a nuclear power station that has never been completed; it should have been built in cooperation with the USSR. After the collapse of the Soviet Union, no other investors were found and the construction plan failed. Currently, there is urbanization called Ciudad Nuclear (“Nuclear Town”).

In the vicinity of Cienfuegos, we can also find the most numerous mango tree plantations of all Cuba. In addition, to the nearby town of Rodas, not so known by tourists, we can find springs of mineral water, that when poured into bottles are sold entirely in Cuba under the brand Ciego Montero, which is the only suitable mineral water. Punta Gorda (Fat Point) was once a luxurious neighbourhood where the Americans left buildings built during the time of Batista. Among the most impressive buildings is undoubtedly the Nautical Club, but above all the Palacio de Valle (The Valle Palace), which is recognized for its mixture of styles with Moorish predominance.

The Palace was built by one of the richest inhabitants of Cienfuegos: Acisclo Del Valle. While he travelled through Spain, he liked the Alhambra so much that he wanted a Palace like that in Cienfuegos, Cuba. According to reports, he spent 2 million pesos on it. When sugar prices fell down in the early 20th century, the magnate Valle went bankrupt and died of a stress heart attack… 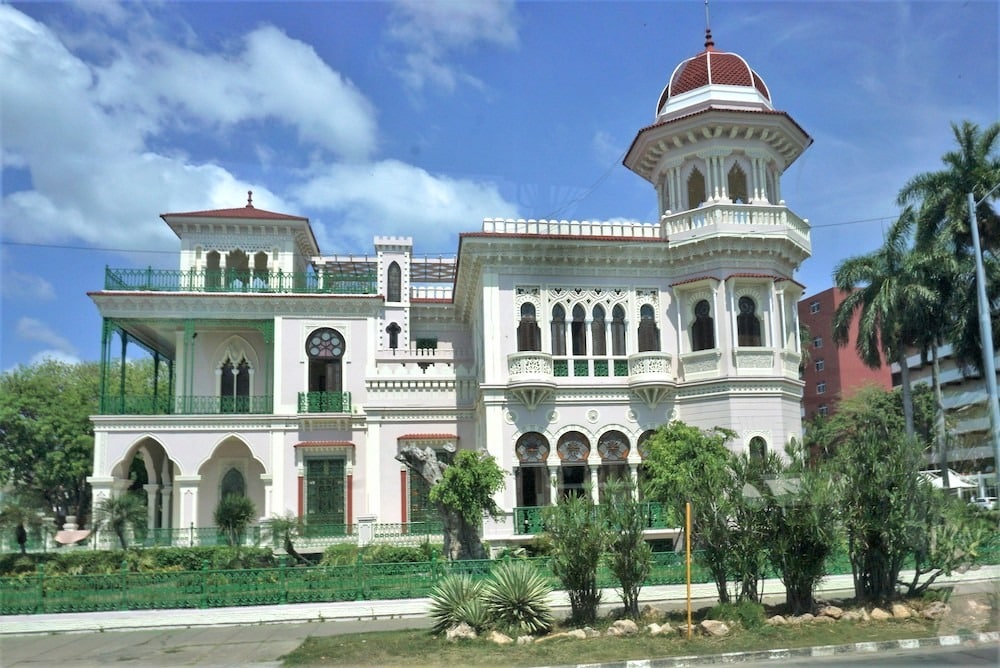 The greatest attention is paid to the Palacio de Gobierno, the government palace. It currently houses the Provincial Assembly. The palace was started to use in 1950. In the Square is worth paying attention to The Ferrer Palace. The blue building hidden in the corner with the beautiful Art Nouveau architecture complemented by white stucco and perfect window joinery can evoke associations with the mythical Paris. An important point of the square is also the Arc de Triumph that commemorates the founding of the Republic of Cuba and the recovery of the independence of 1902. This is the only arch in the whole of Cuba. 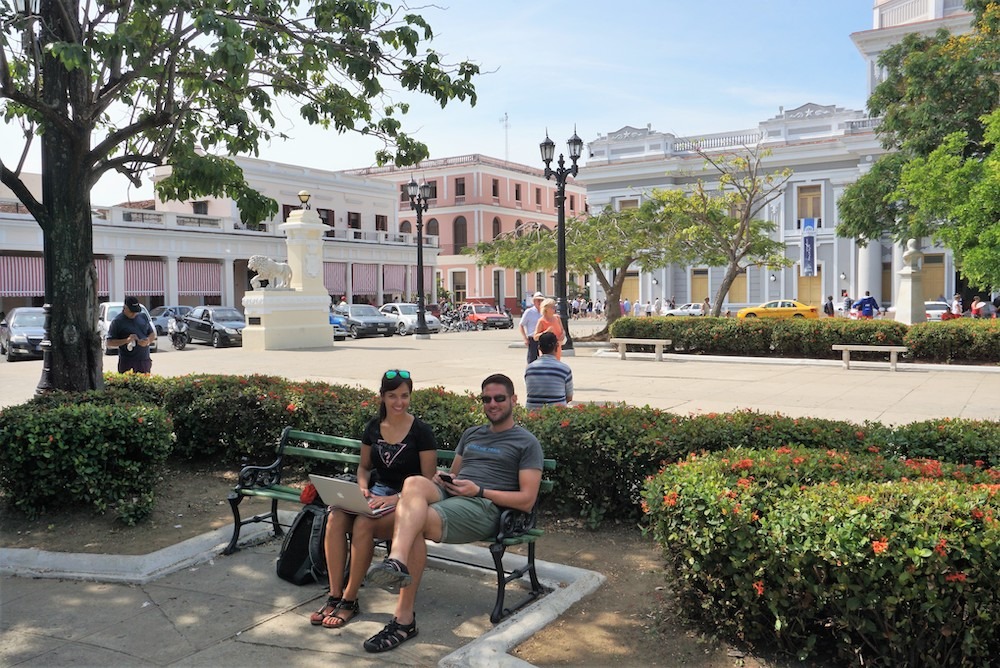 There is also a church from 1869 in the square, to which the stained glass windows were brought from France. It is worth going inside to see the altar with Corinthian columns.

It is also impossible to pass by the San Lorenzo School (in the photo below) with indifference. When the landowner Nicolás Salvador Acea died in 1904, his property was transformed to create two schools for poor children. The first is an arts and crafts school for men and the second is a home school for women.

If we are lucky we will have the opportunity to spend some time in the square listening to music from the gazebo, that is to say, the lookout, which is the central point of the market square. Another name for the gazebo is gloriette. The gazebo is protected from the sun by a dome, one of many that exist in Cienfuegos, therefore the nickname of the “city of domes.” The rounded roof, apart from the lookout, also has the Town Hall and the Cathedral, as well as the palaces of the former sugar barons of the city. Tomas Terry was a Venezuelan emigrant and a sugar magnate. He also made money from the slave trade: he imported and treated the sick and mistreat, and then sold them for a higher price. To change a little his image, he built a magnificent theatre in Cienfuegos. Although the building’s best days are far behind, it is worth going inside to feel the atmosphere of yesteryear. Today, the theatre has 950 seats, balconies and an impressive fresco in the ceiling. The building’s façade was erected in 1889 and in 2019 the theatre had a complete modernization. At the beginning of the 20th century, celebrities such as Sarah Bernhard, an American actress and Enrico Caruso, an Italian opera tenor, performed on the stage of the theatre. 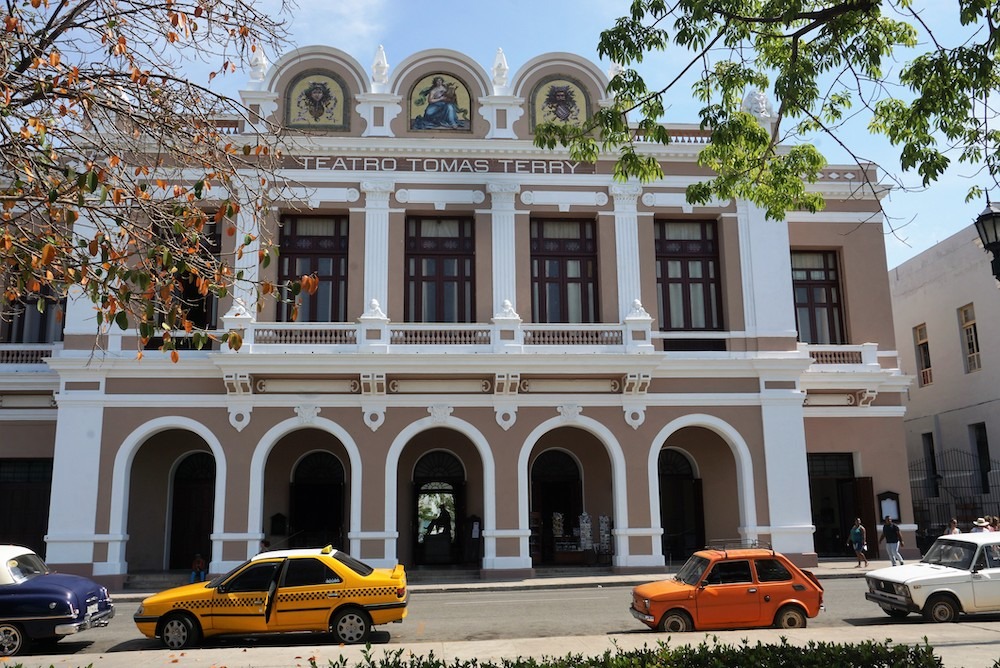 Malecón, a walk inspired by the one in Havana where the Cubans of Cienfuegos spend their free time. Here we will find a moment of respite from the bustling centre of the city. 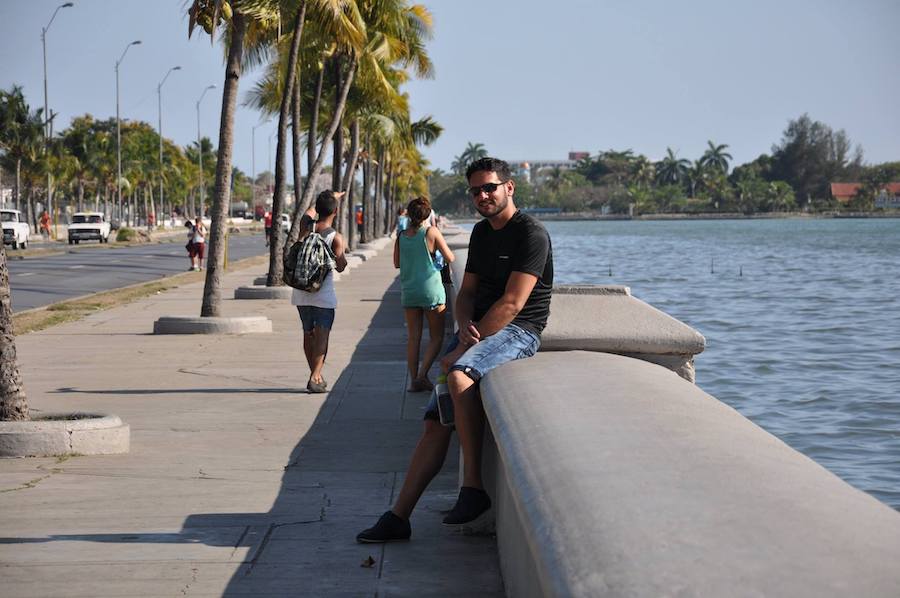 Many attractions of Havana were moved to Cienfuegos. We have Malecón, Prado, but also Coppelia, which is an ice cream shop. Although the one in Cienfuegos is not as impressive as the one in Havana, it is also quite large and serves delicious ice cream every day, if we are lucky it comes in many flavours.

The lagoon is a protected area that is a paradise for bird lovers. If you like nature you will surely appreciate this place and if you are lucky you will have the opportunity to observe pink flamingos in large groups. It is an amazing experience.

For nature lovers, Cienfuegos has another attraction that is the botanical garden named the “Solitude Garden”.

Cienfuegos is not only a city and architecture. If we are tired of the hustle and bustle, we can go to this beautiful beach located only about 20 kilometres from Cienfuegos – Rancho Luna. There is a bar and a restaurant on the beach. There is a dolphinarium next to the beach, but according to our philosophy, we do not recommend visiting places where there are animals in captivity. 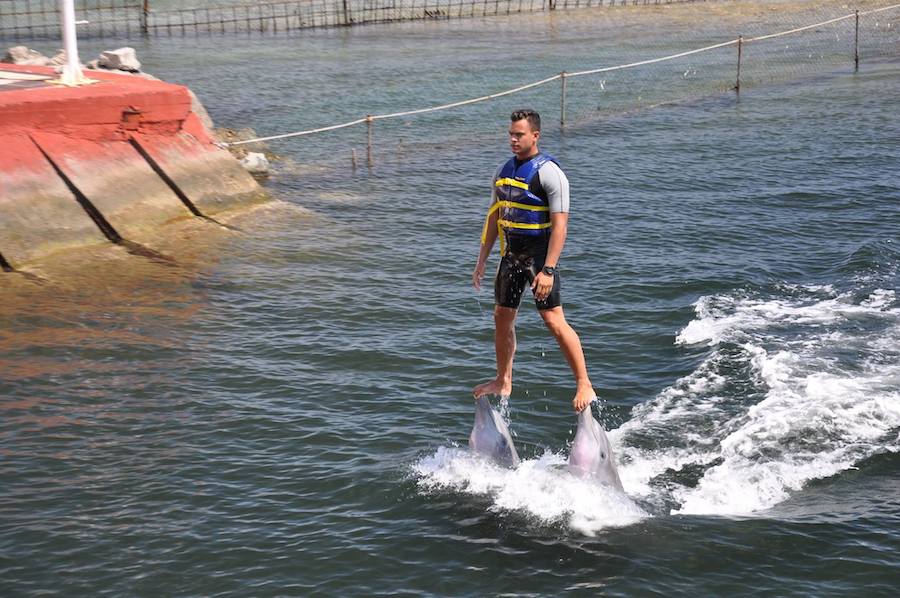 In Cuba, you will find unique worldwide cemeteries that look like small towns. The monuments decorated in white marble do not arouse sadness, but even delight. Among the most famous cemetery of Cuba, the Cristóbal Colón in Havana, in your free time it is worth visiting the Queen’s Cemetery in Cienfuegos. The cemetery was established in 1837 and was initially used mainly to bury soldiers and volunteers who died in the fight for Cuban independence. Nowadays it serves as a municipal cemetery.

The most famous grave of the cemetery is the Bella Durmiente or Sleeping Beauty. The tomb shows a sleeping young woman holding three flowers in a hand: poppies. They are a symbol of sleep and death. The tombstone was made for a woman who died at the age of 24 while giving birth.

The main pedestrian street of Cienfuegos is The Prado. It is the longest street in Cuba. Here you will find many restaurants and its favourite ice cream shop: Coppelia. In Prado you will also find a statue of Bartolomé Maximiliano Moré Gutiérrez, known as Benny Moré. His favourite musical genres were the son and the bolero. He was known in the world as “the Cuban Elvis Presley”.